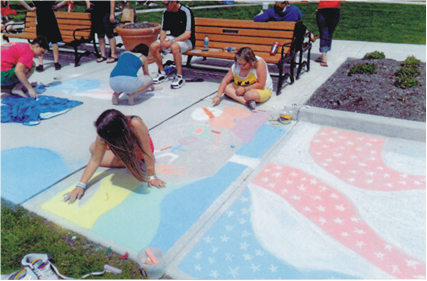 Please join us for the 4th Annual Art & Chalk Walk on Saturday May 17, 2014, rain or shine at the Strongsville Commons at Routes 82 & 42 in Strongsvillle Ohio. It will be held from 9:00 AM until 2:00 PM. To participate and to be judged in the event you must be between the ages of 5-18, and in school. Cash prizes will be awarded in each category for 1st, 2nd and 3rd place. Those persons that are 18 and over may participate as an artist and paint during this event. Cash prizes will be also awarded to the top three artists. An easel and chair under a tent will be provided for you. Be sure to reserve a spot by May 3rd, 2014 to ensure your participation in the program. We will accept walk up registrations if there are any spots still available for chalkers.

Arts in Strongsville Invites you to its 5th annual evening of

Food & Dessert Stations by some of the area’s finest restaurants 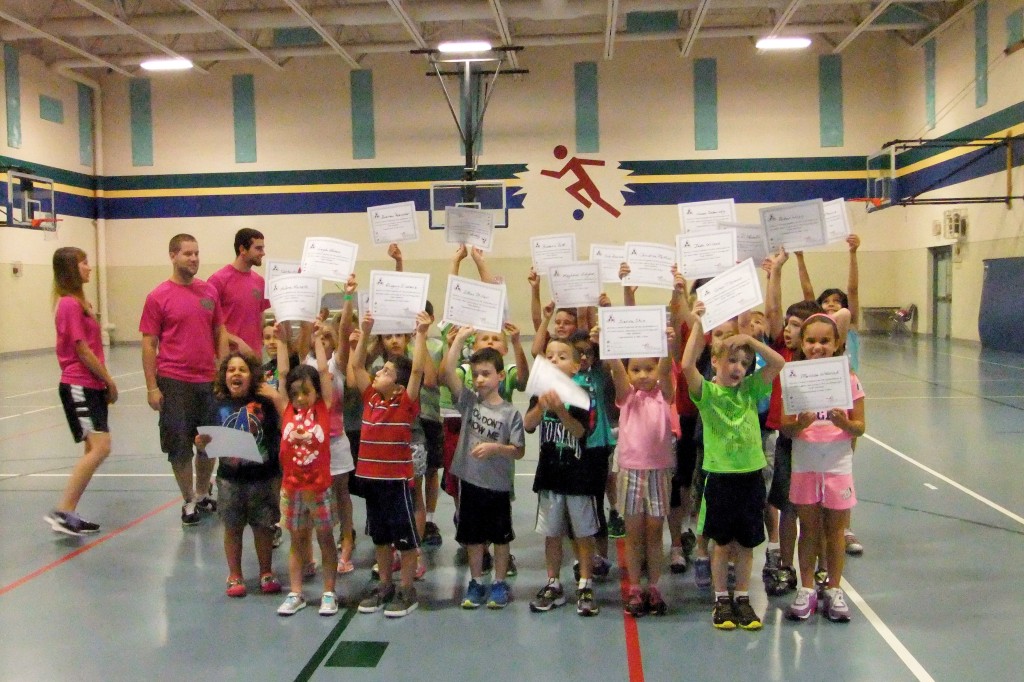 Camp Applause 2013 was a big success!  With 100 plus children ages 4-12 participating there was no shortage of creativity at the Strongsville Summer Camp!

Arts in Strongsville’s Camp Applause offered a series of classes in both visual and performing arts to the children of the Strongsville Summer Camp during the week of July 8th, 2013.  While the children took classes in music, dance, acting and visual Arts, professional theatre artist Lisa Kish also came in as a special guest instructor.  Lisa offered two mornings of  workshops in theatrical props, make-up and costume design.  If you have been to a professional theater in Cleveland chances are you have seen Lisa’s work behind the scenes, particularly her many years of dedication to the Cleveland Opera.  She is currently working on a new project The Prop House in downtown Cleveland.

Lisa Kish along with Heidi Boone will be volunteering with Legacy in Education in the theatre arts tent at Arts in Strongsville’s A Day at the Chalet on Sunday, September 15th.  Be sure to stop by and meet Lisa!

Mackenzie Cunningham is a two-year member and captain of the Lake Erie Monsters dance team.  She is also an officer and three-year member of the honors a cappella group “Rhythm & Roos” at University of Akron. She received formal ballet training at The Joffrey Ballet School of NYC, The Kirov Academy in Washington DC and the Ohio Conservatory of Ballet.  Mackenzie graduated with honors from Strongsville High School where she was a 4 year member of the Mustang Express Show Choir and served as Dance Captain.  She received both academic and dance scholarships to the University of Akron Honors College where she is majoring in Speech-Language Pathology and minoring in Dance.  At Camp Applause, Mackenzie taught song and dance.  Campers learned how to do both vocal and dance warm-ups, how to find rhythm in music, and learned dance terms and steps.  Each age group learned a dance and the dances were performed on the last day of camp for fellow campers.

Kelly Elliott Clark has taught drama to children for over 30 years. She has had fun recently working with Legacy in Education and Western Reserve Playhouse.  Kelly’s professional theater experience includes teaching drama workshops for Stage One: The Professional Theater for Young Audiences in Louisville, KY while working for the Louisville Theatrical Association.  She currently is a teacher candidate with Western Governors University and will be graduating in June 2014 with her Bachelors of Art in Interdisciplinary Studies K – 8 and with that will be teaching children in K – 5th grade!

A note from Kelly!
I had a blast working with the Arts in Strongsville.  I believe all the students walked away with knowing a bit more about theater and acting.  I also believe, by watching the students through the week that some even gained confidence with what we were doing with our pantomimes and improvisations while using different props and hats.  One student who was incredibly shy on the first day and had to “helped” along by one of the counselors, blossomed the next day when we starting working with different types of hats.  He was having so much fun that he didn’t want to put the hats down!

On the first day we started out with a movement exercise to music from Jurassic Park.  Pre-School to 9 year olds learned how to be dinosaurs while listening and moving to the music.  The 10 – 12 year olds became dinosaurs and worked as a team to come up with an improvisation given a situation and then performed it for the other students.  The kids were creative and all had great comedic potential!

The second day of camp all students got to choose a hat from a pile of different hats from sombreros to jester to policeman to little old lady hats and in between and become the character the hat represented!  They then had were paired up and had to make up a story between each other and perform it in front of the whole group!

The third day we worked with different props such as canes, fake money, doctor’s bag, and so on.  The students showed in mime what the prop was used for such as an old man walking with a cane.  Then the twist was they had to come up with something that prop wasn’t used for such as a Darth Vader mask being used as a boat!

All in all the students gained a bit of insight on how to perform in front of one another by not turning the back to the audience and projecting so that the audience could hear them!  These are two huge tips when it comes to acting and performance!

Camp Applause offered Art Classes to children. Each student was grouped accordingly to their age; individual attention was given to all the children. Each Camper enjoyed exploring the different Art Media. 3D Art making, Painting, Etching, and Drawing.

Children created Pinch Pots made out of clay. After maneuvering the clay into a pot, each child painted their design.

The Campers created a very special collaborative art project. Each child demonstrated their artistic skills while painting their own design on a Popsicle Stick. These sticks were then placed carefully onto a matte and framed.

Campers also created etchings. They had the opportunity to learn a little about printmaking. 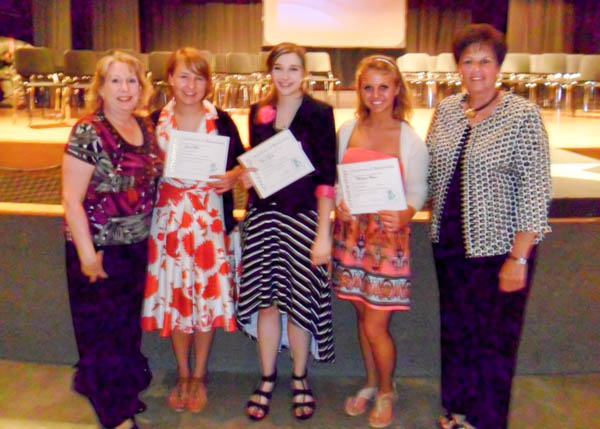 Every year, the Arts in Strongville awards three (3) $1,000 college scholarships to deserving high school seniors who are residents in Strongsville and have a desire to continue studies in the arts in college. This year’s winners were: Jamie Miles, Laura Yurko and Makenzie Olivares. 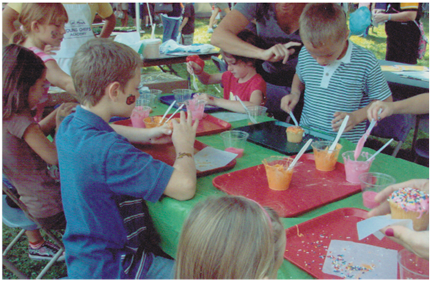 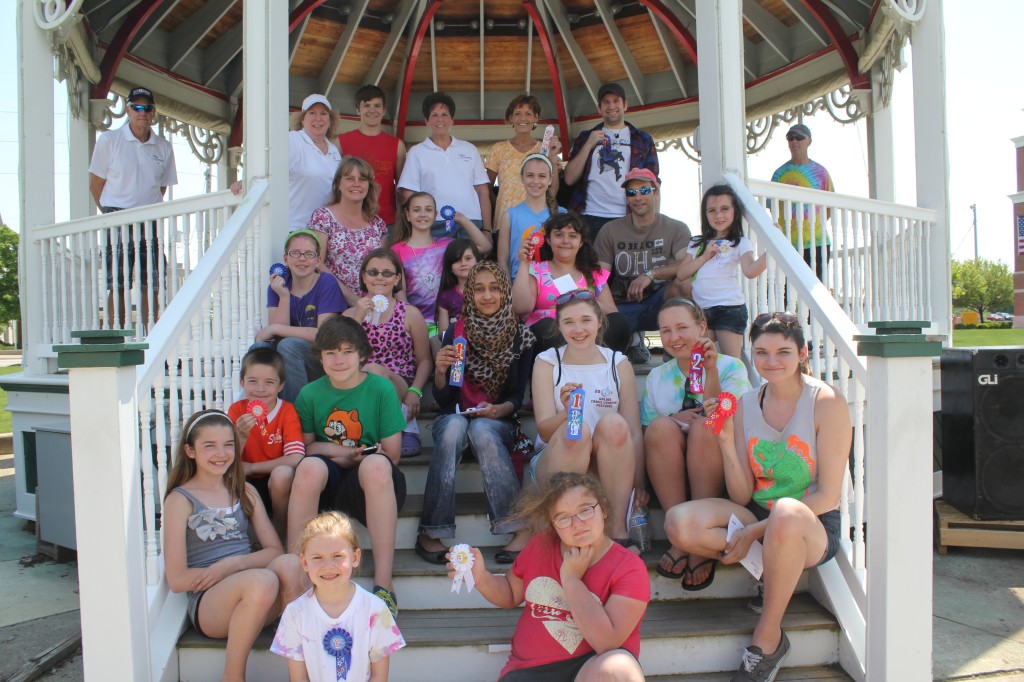 See the winners of the 2013 Art & Chalk Walk held the third Saturday of May every year.

Artists are welcome to come May 18th 2013 to create works of art on the Strongsville Commons.